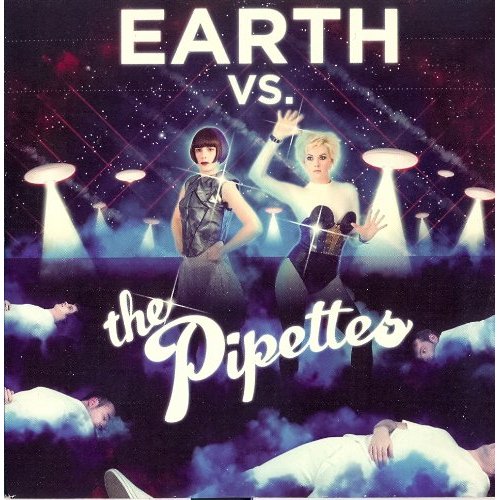 Girls singing retro-tinged tunes with synchronised dance moves? A Machiavellian pop experiment inspired by KLF’s The Manual cooked up in a Brighton boozer by the mysterious Svengali Monster Bobby? Well yes, but there’s been an evolution - a change in the genetics. The Pipettes are back, and now they’re a big shiny pop group. Or at least, that’s what they’d like you to believe.

In their first incarnation, donning polka dot dresses and referencing the girl groups of the late fifties in the heyday of skinny tie indie music, The Pipettes had remarkable success. A top ten album in Japan where the single 'Pull Shapes' was only kept off the number one spot by J-Lo, top ten radio positions all across Europe, two Top Forty hits in the UK and a Top Ten in the US billboard indies. They played on the main stages at Reading and Glastonbury, blazed a British trail across SXSW, conquered the world and sold a heap of records.

Having destroyed the male cock rock hegemony of the noughties and after Ronson, Winehouse, Duffy et al, the whole mini-movement that snowballed inexorably from that first polka-dot sleeved 7", one might think the sensible thing for The Pipettes to have done, would be to simply sashay back in town with a sound as close as possible to the one we know them for and reclaim their rightful place at the head of the table. Not The Pipettes. They had promises to keep. A manifesto to follow. A five year plan.

Those promises were going to have to be kept with the loss of some personnel. Drummer Joe Lean left to find his Jing Jang Jong and Rose Elinor Dougall and RiotBecki left for solo careers away from what the band term “self-manufactured pop”. No bodies under the floorboards, no dramas, just the usual churn in pop bands… Rose, Joe and Becki had their own talents to explore whilst The Pipettes remain focused on exploring pop. And besides, The Pipettes retain a great vocalist in Gwenno Saunders, the lead singer on The Pipettes biggest hit to date "Pull Shapes" and living proof that the Welsh, from Jones and Bassey onwards, have the best pipes. Gwenno’s sister Ani, a talented songwriter and a star in her own right with her own fashion makeover show on Welsh TV, was recruited to reinforce that theory, and Alex White (of The Electric Soft Parade and Brakes) completed the new line-up on drums alongside original members Gwenno, Monster Bobby (guitar), Jon (bass) and Seb (Keyboard).

And so the molecular reconstruction of The Pipettes began, to alter the DNA of the band into pure pop format, leaving behind the realm of the three female harmony girl-group for the unison girl pop of Abba and the Pointer Sisters, moving towards the sounds of Chic-inspired seventies disco and eighties chart music. At the insistence of their international major label that Mark Ronson produce the new record the band walked away from their recording contract to seek their own collaborators for the project. This led them to the door of the legendary Martin Rushent, the semi-retired producer of The Stranglers, Shirley Bassey, Altered Images, The Buzzcocks and, most famously, the Human League’s ‘Dare’. A single listen to the band’s demos was all it took to persuade him to pull the gloves on for one last time. (Martin is now working on a remix album of the record, his first since the pioneering Love and Dancing’ remix album of ‘Dare’ despite hundreds of requests to do others.)

Now the regeneration is complete, the polka-dot dresses swapped for alien chic and the talented musicians behind the singers released from the shadows to emerge as a two-girl fronted, six-piece pop band ready to do battle with the X Factor wannabes and soulless R’n’B grinds clogging up the charts. ‘Earth Vs The Pipettes’ is the name of the full-length record and it’s chockfull of classic influences and killer pop songs, the kind of album that major labels struggle to make with teams of producers and writers, knocked out by a bunch of pop theorists from Brighton, a pair of golden voices from the valleys and a hibernating genius of a producer. Once again The Pipettes are ready to use the past to trail blaze into the future.